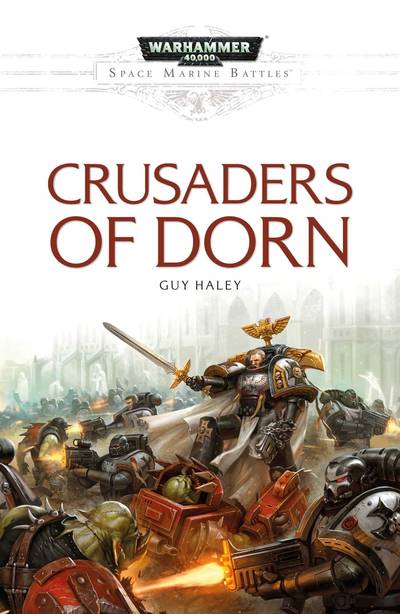 The Space Marines of the Black Templars are valiant warrior-knights who fall upon their foes in a storm of bolts and blades. They are the pious champions of the Emperor and the fanatical devotion of their battle-brothers has driven them to deliver righteous retribution against every traitor, alien and daemonic abomination to have been foolish enough to face them.

Black Templars Initiate Brusc faces alien horrors as he crusades in the dark places of the galaxy.

When the vessel once known as the pilgrim ship Veritas Diras emerges from the warp after three centuries lost, it falls to Black Templars Castellan Adelard and his sword brothers to board the hulk and discover the fate of its crew and passengers. What they find goes against all that they hold dear and they vow to cleanse the vessel of its monstrous taint and return it to the Emperor's light — or die in the process.

Newly raised to the rank of High Marshal of the Black Templars, lord of the Eternal Crusade, Helbrecht has led his brethren into the Ghoul Stars, to wage war on worlds where reality itself is in question and the laws of physics do not apply. As they prepare for a final assault on an alien stronghold, Helbrecht lectures his warriors on the rewards that await them, the glory of battle and eternity at the Emperor's right hand.

In the skies above Armageddon, the Black Templars prepare for war, and the Ancients are awakened. Brother Adelard, interred in the Dreadnought Invictus Potens, leads his brothers to war, facing the prospect of a second death in service to the God-Emperor.

Sword Brother Brusc of the Black Templars clashes with his superiors and his warriors when he defies orders to abandon an Adepta Sororitas field hospital on Armageddon and instead devotes his forces to defending the sisters and patients who reside there against the depredations of the savage orks.

On the war-torn world of Armageddon, the Season of Fire is abating and the Season of Shadows beginning, and Marshal Brusc of the Black Templars faces a long journey across the Ash Wastes. But the enemy awaits even in the great and deadly expanse between hives and soon the Black Templars and their human charges find themselves assailed by ork "Speed Freaks." A deadly chase begins...